Recently, I’m spending a lot of time in the atrium of the Sponza palace.
No, I didn’t move to Dubrovnik, Croatia, nor I’m on vacation: it’s just that the Sponza atrium model, originally created for a rendering contest, has been adopted by the computer graphics community as a test model (especially in the global illumination field), and who am I, working on my master thesis on rendering, to pick something else?

The original model dates back to 2002, but what I’m using is the updated and enhanced version made available by Crytek in 2010.

It features textures, normal maps, specular maps and opacity maps, so there’s plenty of data to be used while rendering.

I’m using Assimp to load models, and I stumbled into a couple problems. I googled about them and found nothing, so I tought that a little post on the subject was worth writing. I mean: if you get lucky and find something not yet on the Internet, you are morally obliged to blog about it before someone else does it! It works like that, right?

Lenna, save us from the missing texture

Obviously,  the missing texture is the one of the only untextured object in the scene: the big vertical drape.  Copying some other drape texture as gi_flag.tga (or changing the filename in sponza.mtl, of course) gives visually acceptable results.

But didn’t make me happy. What was the original texture like? What if it featured a secret message of some sort? What if it was selected between hundreds, by Crytek professionals, to show some effect I could not even imagine? What if this “I WANT THE RIGHT TEXTURE” thing is just some form of OCD and I must see someone?

I googled for the misterious missing texture, gi_flag.tga but had no luck finding it. I found files named gi_flag.tga in some code repositories using the Sponza model, as I am, but after checking them out, the included gi_flag.tga was always some bogus file put there just to make the asset loader happy.

This poor guy on Stackoverflow asked for the misterious texture too, but had no luck, either.

Finally, my investigations brought me watching this amazing Crytek video, where they use the Sponza model at the beginning and around 2:30.

(also, the video humiliated me and my test renderer a lot)

It somehow solved the mistery: the missing texture is a quite boring red stuff with borders. Yawn.

Disappointement, and I still didn’t have the damn file – but it was time to move on, leaving the gi_flag.tga failure behind me. So, as you may imagine, after some hours of flying around with the camera, testing the shaders, looking if the alpha blending is done correctly, if the normal maps are applied properly, etc, the Sponza palace slowly becomes a boring place. Lion heads. RGB Drapes. Bricks. Plants. More bricks. All static, dead. Depression is around the corner, especially when you waste 3 hours ’cause you forgot to transpose a matrix, or something like that.

Consequently, I tought that selecting missing texture could be an occasion to make the place happier. How? Suddenly, the right answer came to my mind: Lenna. 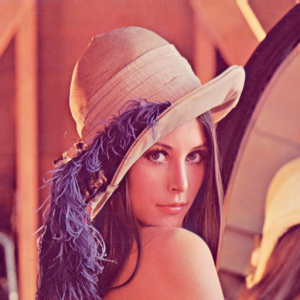 This picture of Lenna Söderberg, scanned in 1973 from a Playboy issue (to be used as test image for a scientific paper), became a standard test image for compression algorithms and image processing.

I encourage you to visit http://www.lenna.org for the full story.

And the iconic image is a naked woman, turning a bitter failure into an epic win. Hey, that’s how I see it. 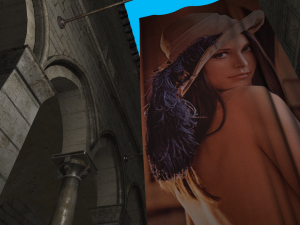 Of course, you’re welcome to spread the usage as gi_flag.tga of this Lenna texture I prepared.

I properly cutted the original image to let it fit the drape geometry: I’m a gentleman, and gentlemen never let texture get stretched improperly – that could make women on them look fat.

Where are my specular maps?

This is not interesting and not funny: sponza.mtl is missing the “map_Ks” entries used in the .mtl file format to refer to specular maps. I tought it was some other Assimp quirk (for example, it loads the normal maps as height maps), but when I checked the sponza.mtl file I found no reference at all to the *spec.tga files, so Assimp was innocent.

Luckily, the files are consistently named, so a specular map named “sponza_thorn_spec.tga” can be tied to the material that refers to the “sponza_thorn_diff.tga” texture.

That’s what I did, assigning all the provided specular maps to the appropriate materials.

And here you are the updated sponza.mtl file, so you don’t have to repeat the boring file editing process:

With this, I made the post concretely useful for other people, so I’m forgiven for all the Lenna delirium.

… you now what? I’m dating this post April 1st, I can post whatever I want and still pretend to be a serious person.

6 Responses to Of missing textures, Assimp, the Crytek Sponza atrium, and naked women